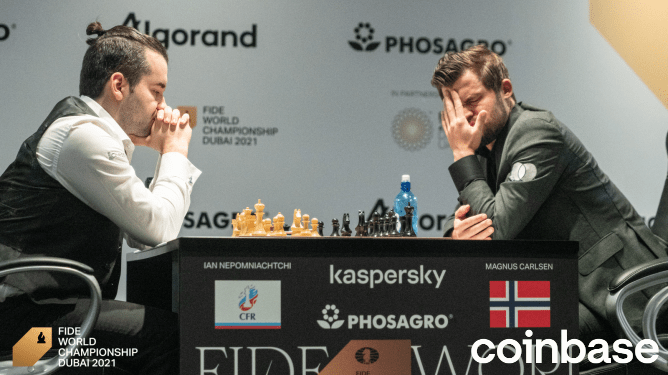 The World Chess Championship 2021 is an ongoing chess match between reigning world champion Magnus Carlsen and challenger Ian Nepomniachtchi to determine the World Chess Champion. It is held under the auspices of FIDE, the world chess federation, and played at Dubai Exhibition Centre, Dubai, United Arab Emirates, between 24 November and 16 December 2021. The time control for each game is 120 minutes for the first 40 moves, followed by 60 minutes for the next 20 moves, and then 15 minutes for the rest of the game, with an increment of 30 seconds per move starting from move 61. The match consists of 14 games, and a score of 7½ wins the world championship. If the score is equal after 14 games, tie-break games with faster time controls will be played: 4 rapid games with 25 minutes each + 10 seconds increment starting from move 1. If a player scores 2½ points or more, they win the championship. If the score is equal after the rapid portion, up to 5 mini-matches of 2 blitz games will be played. Time control is 5 minutes + 3 seconds increment. If any player wins one of these mini-matches, the tie-break ends and they win the championship. If all 5 blitz mini-matches are drawn, 1 sudden death (Armageddon) game will be played, where black has draw odds and 4 minutes, and white has 5 minutes. Players receive 2 seconds increment starting move 61. Players cannot agree to a draw before Black’s 40th move. The prize fund is €2 million split 60% vs 40% between winner and loser. If the match is tied after 14 classical games, the prize fund will be split 55% vs 45% in favor of the tiebreak winner.