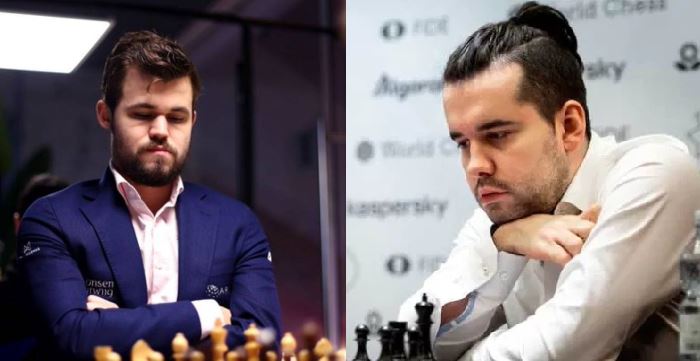 The World Chess Championship 2021 will be a chess match between reigning world champion Magnus Carlsen and challenger Ian Nepomniachtchi to determine the World Chess Champion. It will be held under the auspices of FIDE, the world chess federation, and played in Dubai, United Arab Emirates, between 24 November and 16 December 2021. The match was originally scheduled for the latter half of 2020, but was postponed until 2021 because of the COVID-19 pandemic. The prize fund is US$2million split 60/40.

Magnus  Carlsen, born 30 November 1990 is a Norwegian chess grandmaster who is the current World Chess Champion, World Rapid Chess Champion, and World Blitz Chess Champion. Carlsen first reached the top of the FIDE world rankings in 2010, and trails only Garry Kasparov in time spent as the highest-rated player in the world. His peak classical rating of 2882 is the highest in history. Carlsen also holds the record for the longest unbeaten run in classical chess. A chess prodigy, Carlsen finished first in the C group of the Corus chess tournament shortly after he turned 13, and earned the title of grandmaster a few months later. At age 15, he won the Norwegian Chess Championship, and at 17, he finished joint first in the top group of Corus. Carlsen won the category 21 Nanjing Pearl Spring tournament, 2½ points ahead of second-place finisher Topalov, the world’s highest-rated player at the time. He scored an undefeated 8/10, winning every game as white against Topalov, Wang Yue, Leko, Teimour Radjabov, and Dmitry Jakovenko, and also winning as black against Jakovenko. By rating performance, this was the greatest result in chess history, with a performance of 3002!  He surpassed a rating of 2800 at age 18 and reached number one in the FIDE world rankings aged 19, becoming the youngest person ever to achieve those feats. Carlsen became World Chess Champion in 2013 by defeating Viswanathan Anand. In the following year, he retained his title against Anand, and won both the 2014 World Rapid Championship and World Blitz Championship, thus becoming the first player to hold all three titles simultaneously, a feat he repeated in 2019. He defended his classical world title against Sergey Karjakin in 2016, and against Fabiano Caruana in 2018. 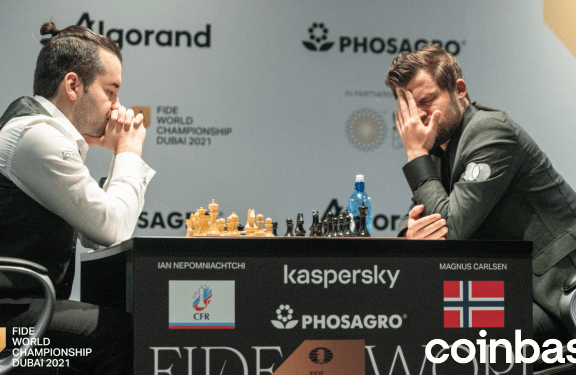