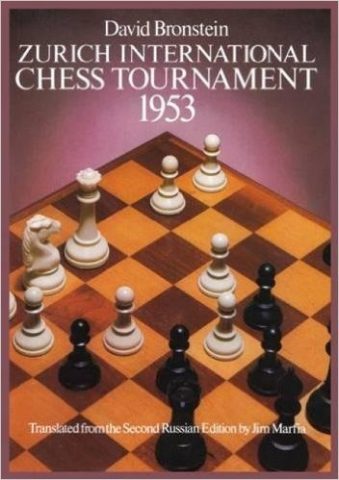 The book of a strong tournament is more than just a games collection. When its participants are the world’s strongest players . . . the tournament as a whole represents a step forward in the development of chess creativity. We may take as examples of such tournaments the events at Hastings 1895, St. Petersburg 1914, New York 1924, Moscow 1935, and Groningen 1946. Beyond doubt, Zurich-Neuhausen 1953 deserves a place among them. Almost all the games were hotly contested, and many are masterpieces of the first rank. To mention Euwe-Smylov (round 3), Taimanov-Najdorf (round 4, winner of a brilliancy prize), and Keres-Reshevsky (round 11, one of the most reproduced and analyzed games in chess), is just to touch the tip of the iceberg; there are literally dozens of memorable, innovative games in this volume, including a substantial portion by the author, one of the game’s greatest players, who finished tied for second with Keres and Reshevsky, behind the winner Smyslov. The most important aspect of this book is how the Author is anotating the games. He is using strategic approach to the games which can give to the reader illustration how a Grandmaster thinks.

The great Bobby Fischer takes the reader move by move through 60 of his most instructive and entertaining games, including the astounding “Game of the Century,” played when he was only 15 years old!

8.Half a Century of Chess – Mikhail Botvinnik

In a collection of ninety annotated games, the former world champion demonstrates his strategic style.

Mikhail Tal, the ‘magician from Riga,’ was the greatest attacking World Champion of them all, and this enchanting autobiography chronicles his extraordinary career with charm and humor.

By concentrating on the basic principles the average player is not only given a working knowledge of the endgame but also a firm foundation on which to further develop his or her interest and technique in this fascinating stage of a chess game. The author, a Russian Grandmaster and endgame expert, takes the reader from the most elementary checkmates, through the exploitation of positional and material advantage, right up to the analysis of actual endings from master play.

This third volume in Mark Dvoretsky’s School of Chess Excellence series is devoted to questions of strategy aimed at improving the reader’s positional understanding. The author also examines a number of positions that lie on the boundary between the middlegame and the endgame. As in the other books in the series, Dvoretsky uses examples from his own games and those of his pupils as well as episodes from other players’ games.

The author of the books is the Grandmaster and honored Russian coach who headed the All-Russian chess school. At his lessons Alexander Panchenko, following the advice of world champions J.R.Capablanka and V.V.Smislov, placed the highest emphasis on endgame (without neglecting the other stages of a chess game, for sure). The result surpassed all expectations: dozens of Grandmasters and Masters graduated from the school – Sergey Rublevsky, Alice Galliamova, Ruslan Scherbakov, Maxim Sorokin, Michael Ulibin, Svetlana Prudnikova, Tatiana Shumjakina and many others.

This is a classic! Few books have had as much impact on chess literature as this one and it was immediately recognized as a masterpiece of chess instruction. This book remains a bestseller in the field and one of the best practical training manuals available.

In a major event in chess publishing, two German endgame experts have produced a masterly one-volume encyclopaedia that covers all major endgames. This is the first truly modern one-volume endgame encyclopaedia. It makes full use of endgame tablebases and analytical engines that access these tablebases; where previous authors could only make educated guesses, Müller and Lamprecht have often been able to state the definitive truth, or get much closer to it. This book provides comprehensive assistance for any players wishing to study the endgame. In addition to a feast of detailed analysis, the authors emphasize the practical side of endgame play, describing rules of thumb, principles, and thinking methods.

This is the all-time chess classic of Aron Nimzowitsch. My System, is a book on chess theory written by Aron Nimzowitsch. Originally over a series of five brochures from 1925 to 1927, the book—one of the early works on hypermodernism—introduced many new concepts to followers of the modern school of thought. It is generally considered to be one of the most important book in the history of chess. Recommended by Grandmasters and masters for 75 years!